Klara’s relationship with Petr was on the rocks.

She sipped a cup of tea as she sat at the kitchen table and observed him. He was an okay guy, kind to her and generous with his time. They’d been together for a few months and had started to build a relationship, but it didn't feel like there was enough there to keep it going. She wanted someone a little more adventurous or ambitious or something and he just seemed a bit too plain.

She didn’t see a future with him. There was a certain x-factor missing.

She looked him up and down as he inspected the package from the delivery room of her apartment building. He smiled as he looked at her but his eyes told her he felt it too.

“What is it?” She asked, referencing the package in his hand.

“I think I know what this is. From the day after the party last month” he replied as he pried at the large envelope wrapped in tape.

She cast her mind back and recalled a big evening where two groups of strangers came together in fancy dress. His and her friends, many meeting each other for the first time. Lots of people were dressed up and there was a lot of drinking. Late in the evening she had snuck off with an errant Catwoman mask that had been left by its previous owner and worn it while she drunkenly gave him a secret blowjob in the bathroom. Hungover but still enthusiastic about the night before they put an order online for some dress up gear the next day.

Smiling, he ripped the paper open on the table and spread out the plastic bags of bits and pieces.

There was a spiked dog collar and two masks. A bunny rabbit and a tiger. The rabbits ears were in separate bags and she unwrapped them as he wrestled plastic wrap off some of the other items. She glanced coyly at the metal shapes and foam wrapping paper in his hands as he tackled a small bag of cling-film.

It’d been a while for the delivery to arrive and she’d almost forgotten entirely about their shopping spree; but she hadn’t forgotten what it felt like to wear the mask.

Across the table he’d pulled everything out of its wrapping and organised it on the table.

“Did we really buy all this..?” he queried as he picked up a silver item and inspected it.

It was a metal butt plug, flared at one end with a black tail made of fake fur. On the table a similar object was laid out - the same shape but with a fluffy black bunny tail. He picked up the spiked collar and clipped the buckles together as she bit her lip.

Klara loved sex and Petr certainly wasn’t the worst lover she’d ever had. When they fucked he was aware of her needs; but she was naturally submissive, reticent of her desires and he wasn’t forceful enough with her to open her up so she could be who she really wanted to be.

He clipped the ears onto the bunny mask, taking a couple of goes to figure out how the four rivets clasped together before organising all the items in a row.

There were two masks, two tails, the collar, a tube of lubricant and then, the most exciting items… ten metal claws that slipped over the fingertips. She reached across and picked one up, slipping it onto her finger. It was about an inch long, with a pointed tip. Not sharp enough to draw blood, but certainly sharp enough in her fingers to give her reason to imagine them on her body.

He picked up the cat mask and slipped it on. It covered his eyes and left his mouth and facial hair exposed. The mask wrapped up into a couple of pointy ears. He looked pretty sexy in it and his simple slim fitted t-shirt he wore.

He did have a nice pair of arms she thought to herself as she surveyed him the mask and saw his smile under the black leather on his face.

She slipped the claw off her finger and placed it back on the table with the others, swapping it for the bunny mask. It was leather and had large openings for the eyes. The ears were cute and clipped on with buckles and rivets that held the rest of it together in other places, on the back there was an intricate collection of straps, obviously intended for a woman’s head so she could do something with her hair when she had it on.

She slipped the mask on It immediately conjured up memories of the night of the party.

She slipped on the bunny mask and adjusted the straps till they were tight while recounting the last time she’d tried a mask at the party.

She felt very sexy as she eyed him up from behind the leather. His mask gleamed as he adjusted the claws and put them on one by one. He looked like someone else entirely. She felt the arousal between her legs start to creep through her body as she dissociated him as the unadventurous guy that didn’t do the dishes and instead began to picture him as a stranger in a leather mask with a nice pair of arms and sharp claws on his fingers.

She collected the remaining toys off the table and strode to the bedroom, removing her clothes as she went.

The metal claws were sharp and cold as he ran them down her back, scratching her deliberately as he approached from behind. She slipped her panties off onto the floor and stood naked as he embraced her from behind, running the metal across her chest lightly as he held her. they were sharp but didn’t cut her, but as she looked down and saw them rake across her chest they left little red lines that flushed on her skin.

She was aroused at the thought of the stranger behind her, cupping her breasts as he drew the claws across her body and the mask pressed against her while he kissed her neck. She watched from the corner of her eye into a mirror across the room. She hadn’t really realised until now that he was quite a bit taller than her until he was brushing his lips on the back of her neck while he held her. The texture of the red marks from the claws dissolved into her chest as the desire to be fucked overcame her.

She tingled as his facial stubble ticked her neck and she held up the butt plugs in her hand. He took the bunny tail off her and, still embracing her from behind squeezed a handful of the lubricant onto his free hand and smeared it onto the metal as the claws clacked against each other.

She could hear him squeezing more lubricant from the tube and preparing the cat tail buttplug. She watched him from the corner of her eyes in the mirror out of the mask and giggled as he winced from the cold metal going into his body. From her viewpoint she should see his erect cock and the tail hanging out of his ass as he drew the claws over her backside and up to her ribs. The texture of the metal was exciting and made her shiver as she watched him begin to push into her from behind, the little tuft of the bunny tail toy sticking out of her ass playfully as he did.

His cock felt wonderful and she started to think about two strangers connecting for the first time.
In the bunny mask with the deviant toy in her ass she was dissociated from the waning relationship with a boring guy and becoming the naughty sexual being she wanted to be. She could tell something was brewing in him too as he started to become more enthusiastic than usual. He grabbed her by the back of the neck ensuring that the metal claws dug into her as he forced himself as deep as he could inside a few times, filling her up entirely before pushing her face first onto the bed assertively.

She smiled and wiggled her ass as if to tease him but was caught surprised as he dove on her and forced her onto her back, digging the claws into her body and clutching at the hair he could reach under the mask. He grabbed at her and the force made her struggle playfully as he handled her.

He stuffed his cock into her; her wet little snatch accepting it greedily as he pushed down. The hot slab of meat parted her and she moaned at the sensation of being stretched and filled up.

His fucking became more frantic and sweat started to pool on her chest as he held her. The frenzy of hot forceful sex began to take over and she started thinking about nothing else than being filled up with cock and being held down by the vigourous man in the cat mask with the claws on his fingers that raked and grabbed at her.

She started to imagine him becoming the animal, a frenzied wild beast who’s only train of thought was to force himself into her more and more.

He started to moan as he nuzzled her and then quite unexpectedly, did something he’d never done before.

Pressed on top of her, the cat mask rubbing against her neck he licked and suckled her earlobe and started to purr and then snarl like a tiger in her ear. The sound was feral and she shuddered as the beast heaved and growled on her while it forced her down and fucked her in a frenzy.

Her knees buckled and she was helpless as it forced down on top of her, clutching at her as its thick hot cock pushed and pulled in and out of her. She gasped in ecstasy and murmured and gurgled as it pressed its relentless biting, snarling and growling ardor onto her.

Drenched in wetness it lifted its chest off her. The licks of their sweat spilled off the edges of the masks and dripped off the sides. It looked her in the eyes through her own mask and snarled again as it clutched at a handful of her hair. Its mouth was open and a string of hot syrupy drool strung down of its lips and splashed on her face as the relentless fucking continued.

Another string of thick warm saliva dribbled down onto her. First on her chest and then onto her face, she slurped at it as it entered her mouth and then, forcing her hand free from his frenzied embrace she smeared the rest of it into her chest and rubbed it on her cheek.

The beast smiled decadently and she bucked, covered in feral drool and sweat while the onslaught of ecstatic fucking continued.

Close to passing out from the choking, her own orgasm exploded through her body. It raced from her pussy in all directions, down to her toes and up to her throat where it was stopped momentarily at his restrictive force. The beast loosened its grip and the rush of blood hit her in the head and made her woozy with the ecstasy. She gasped and inhaled sharply before howling in pure pleasure as the second wave hit her so hard she squeezed the butt plug so much it popped out of her ass.

Her eyes rolled into the back of her head and she went limp, flushed and twitching from the fucking she’d just endured. It felt incredible.

She stared up at the ceiling exhausted and paralysed.

She was still going to break up with him.
But maybe not just yet... 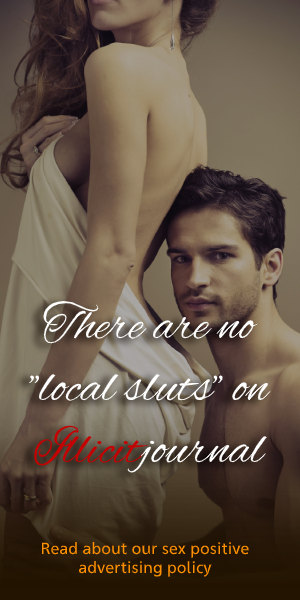